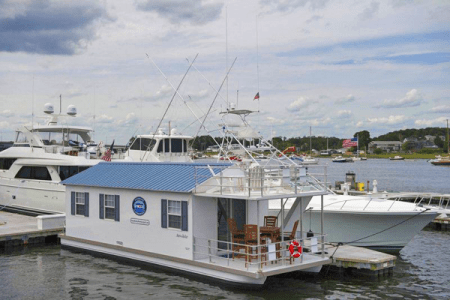 NEWBURYPORT— It’s sometimes said there aren’t a great many hotel rooms in this community. But at least one alternative comes with a view of the water.

A houseboat called Dockside recently opened as an overnight rental, tied up at Harbor Marina behind the Starboard Galley restaurant on Water Street.

The houseboat is owned by New England Development and offers a one-loft bunk, a living room with a pullout sofa, a bathroom, kitchenette and dining nook. The craft also features a TV, Wi-Fi and air conditioning.

The vessel sleeps four, and there are outdoor upper and lower decks for watching the river — and numerous pleasure craft— cruise past.

“It’s a different kind of experience,” said Matt Kirk, a NED manager who is supervising the local launch of the new enterprise. “Guests are on the water and close to town.”

Kirk is manager of Michael’s Harborside restaurant, and the information sheet he hands out to guests lists restaurants, shops, museums and medical resources as most hotels would.

He said a benefit of the houseboat is that guests can cook meals in their galley or visit nearby restaurants.

Anyone staying in the houseboat won’t be alone on the water. Newburyport Harbor has numerous river dwellers.

Close to 1,500 boats are registered with the harbormaster’s office on the Newburyport side alone, and more vessels cruise the river from Salisbury, Amesbury and upriver.

Newburyport City Councilor Robert Cronin, who has a boat on the river, once called the boating community “a second city” in the summer, and suggested many boat owners stay on their boats all weekend to enjoy the river, the sunshine and to socialize with other boaters.

Guests at Dockside – which was trucked here from Tennessee – are docked for their entire stay since the craft doesn’t have an engine.

Newburyport has some quality overnight accommodations, including the Clark Currier Inn, the Compass Rose Inn, the Essex Street Inn, the Garrison Inn and the 167 Water Bed and Breakfast.

But none offers views of the water from every window, and a bed that undulates with the current and tide.

Rates for Dockside, from Sunday through Thursday, start at $229 per night.

Fridays and Saturdays start at $279 per night.

“We have had amazing feedback from the first guests,” said Khaled Hashem, hospitality director for New England Development. “It’s a different kind of experience and people have really liked it.

“We thought the idea might work in Newburyport, which doesn’t have so many hotel rooms. This is the first time we’ve tried it and we’re pleased so far.”

Hashem, who runs recreational events on Nantucket and other resort areas where NED has commercial interests, said possible expansion of the houseboat idea will be evaluated at the end of the season.

Ann Ormond, president of the Greater Newburyport Chamber of Commerce and Industry, praised the unique concept.

“This is a very interesting addition to the accommodations here and a creative idea,” she said.

“Anything near the water is popular at this time of year, and this houseboat has great views of the water, the boats and the people on the waterfront. It’s a little off the beaten path, so there’s privacy. I’ve heard they’ve had demand for it as soon as they announced it.”

Floor plans can be viewed on the site.

The vessel is owned by New England Development.

The name of the enterprise is Houseboats at Newburyport but there is only one houseboat at this time.